A restaurant kitchen brigade is a concept for the hierarchy that makes up a professional kitchen. The idea was first developed by Georges Auguste Escoffier, a French chef of now legendary status. He is widely considered the “emperor” of all chefs. He was a central figure in developing what became modern French cuisine, and in turn, many of the accepted practices of cuisine the world over. 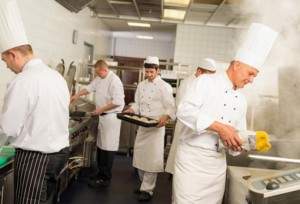 The idea of the kitchen brigade is broken into multiple parts, meant to help a kitchen run as efficiently as possible with each member given particular tasks that they must each excel at. It was put into practice by Escoffier alongside Cesar Ritz (who is world famous himself thanks to the Ritz Hotel) across several hotels in Europe. The break down of the kitchen is as follows:

As you would expect, the apprentice is the lowest ranking member of the brigade. Much like an intern on any other job site, the apprentices were given more mundane yet labor intensive jobs around the kitchen, all while being tasked with observing in order to study up on the culinary arts as carefully as possible. Apprentices usually did jobs in every single area of the kitchen, giving them a good overall understanding of each “moving part.” Provided they work hard enough, they would generally aim to be promoted up into the commis position.

Commis-chefs are a step up from the apprentices. They are still doing what is effectively grunt work, only it’s more specialized overall. The commis were attendants assigned to one station of the kitchen in particular. Though considered to have a low skill set overall, the training involved in this particular level of work would generally lead to eventually being promoted into a demi-chef.

Demi-chefs would essentially act as assistants to station chefs, or a chefs de partie. The preparation aspect of meals were done by demi-chefs, usually along the lines of gathering ingredients and getting them ready for cooking. If mundane tasks such as whisking or stirring needed to be done, it was often handled by a demi-chef. Any work they did was overseen by a station chef, and they were generally skilled enough to run a station if its chef de partie wasn’t there at the moment.

The chefs de partie were comprised of station chefs that are responsible for particular aspects of a given meal. Each one specialized in certain types of foods, ingredients, or even particular cooking styles. This is one of the positions in which the very antithesis of the “jack of all trades, master of none” approach is shown. Rather than have one chef try to fill many roles, there will multiple chefs that all did one particular job especially well. They all worked together to make sure every part of the meal was as well executed as possible. The chefs de partie worked alongside numerous demi-chefs and commis to work on each meal.

Though these positions were considered to be of a lower skill set than others, they were the specialists when it came to the likes of stocks, soups, and sauces.

If a dish was meant to be served cold, the garde manger was on top of it. Their potential specialties included cold meats, hors d’ouerves, salad, various buffet entries, decorative garnishes, terrines, pates, and more. As such, this position is considered one of the most versatile of the entire brigade.

As you might guess from the name, the boucher is the butcher of the restaurant kitchen brigade. Much like any classic butcher, they would prepare various cuts of meat, fish, and poultry. These were generally delivered to the garde manger, who would then assign them to particular station chefs as needed.

Despite having a butcher, even they were not assigned with every single meat related task. The charcutier was in charge of preparing various pork based foods. The potential lineup included all of the old standards such as ham, sausage, and cured meat, alongside the decidedly much fancier pate, pate en croute, and rillette. Like the boucher, charcutier would also consult with the garde manger as needed.

The icy name should tip you off on this particular brigade member’s duties. If a frozen or otherwise chilled dessert was ordered, it was the glacier’s duty to get it ready. Potential jobs ranged from preparing favorites such as ice cream, pudding, and mousse to more elaborate endeavors such as creating impressive ice sculptures.

While that made up the basic back bone of any kitchen brigade, some divided the tasks up into even more positions, while others managed them a bit differently altogether. Though the practice was deemed to be effective at keeping a kitchen both fast moving and also capable of preparing fantastic meals, there are a lot of kitchens today do not adhere to the same exact layout. Even so, the restaurant kitchen brigade still inspired much of modern cuisine. There are still hierarchies that exist in the kitchen’s of today, including executive chefs that oversee the entire operation, and sous chefs mostly responsible for preparation. While there may be less moving parts in a modern kitchen thanks to technological advancements, the way tasks are delegated has direct ties to Escoffier’s brigade system.